I never saw it coming 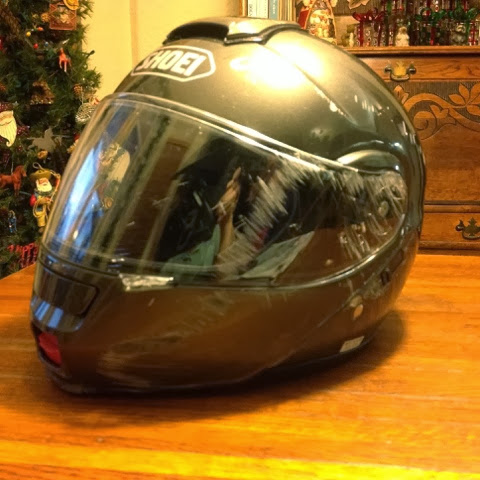 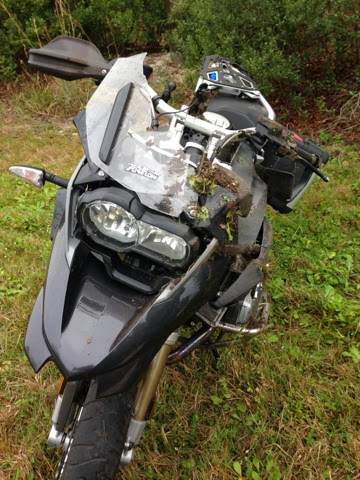 On Saturday, Deceember 28th, I was going to meet friends to have breakfast and take a short ride. Less than 10 minutes after leaving the house, as I was riding a road that I have ridden a thousand times, a deer, hit me on the right side.  I saw this poor animal for less than a quarter of a second and the next thing I remember is being loaded into the ambulance.  I was extremely fortunate in that I did not suffer serious injury.  Scrapes and bruises and aches in places where I didn't know I had places, but, overall, I am in much better shape than I had any right to expect.  I hit the deer at 55mph.  This was the speed limit and I never had time to apply the brake.  I killed the deer.  And alas, I totaled my motorcycle, ruined my helmet and destroyed a set of good motorcycle boots.  I had on really good gear and this likely saved my life.
Anyone that thinks it is never going to happen to them, or that any helmet other that a full face one is sifficent is only kidding themselves.  If you ride long enough, you are going to need the best gear you can buy.  I have ridden over 52 years and never had a moving accident.  This was unavoidable from my standpoint.  To all of my motorcycling and bicycling friends out there take heed.  ATGATT. All the gear all the time.
Posted by DicksLongRide at 6:47 AM No comments: 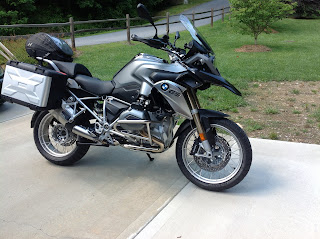 It finally arrived. Weather in North Carolina has been rainy so I bit the bullet, put on my rain suit and went riding in the rain.
Posted by DicksLongRide at 2:25 PM No comments:

Utah has become one of my favorite states for motorcycle riding.  Then state has five national parks and numerous areas in between with beautiful vistas and great riding.  The ride from Torrey, Utah to Zion National park is spectacular.  We stayed the night in Escalante, Utah, where the accommodations were just so so but the food was wonderful. 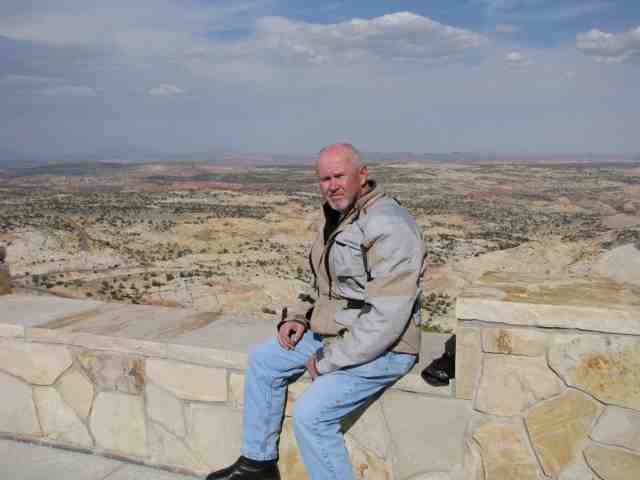 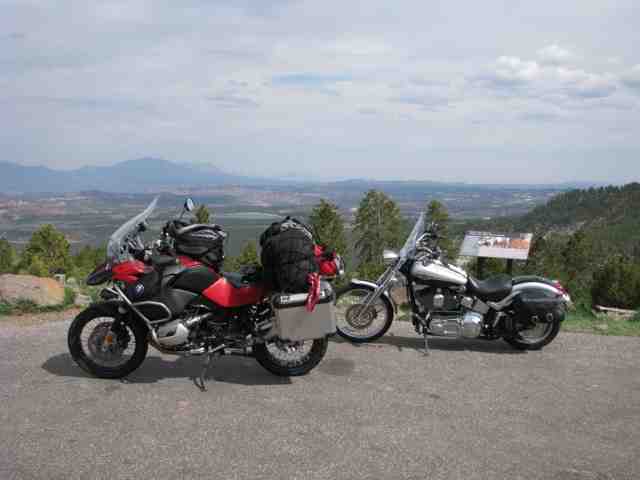 Posted by DicksLongRide at 7:43 AM No comments:

When we awoke this morning the temperatures outside 44°.  When we finally got on the bikes the temperature had not changed much. After riding about 100 miles it was time to stop and take off a couple of layers of clothing.  Not long after our stop a driver motioned to Ted that his bag was missing from the back of his motorcycle.  For the next hour Ted and I searched for the bag.  I spotted the straps laying on the highway so I stopped to do a more detailed search.  After about five minutes a gentleman came along in his pick up truck asking us if there was something wrong. When we indicated that we had lost a bag he said he had it in his car.  While Ted was extremely happy to have the bag returned, since almost everything he brought on the trip was in it, his computer was, for the most part, trashed.
Speaking of Ted, below you will see a photograph of him with his motorcycle.  If you compare that photograph to the one of me next to my motorcycle you will see a study in contrasts.  Ted and I are different in so many ways. Ted is dressed to impress, rides a very cool motorcycle, carries numerous coordinated outfits, and in general projects a very macho image as he rides down the road.  I, on the other hand, ride a motorcycle that many consider down right ugly, dress for the conditions, and look like the motorcycle equivalent of the Beverly Hillbillies coming down the road.
The last picture you see is of a portion of the Black Canyon of the Gunnison.
Tonight we are in Grand Junction Colorado and anticipate riding into Utah tomorrow. 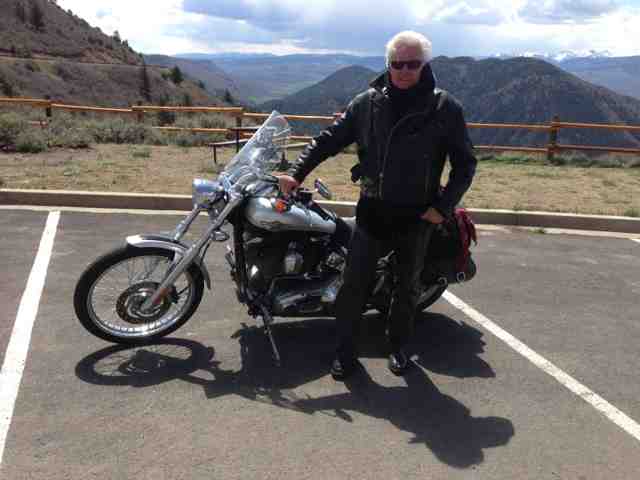 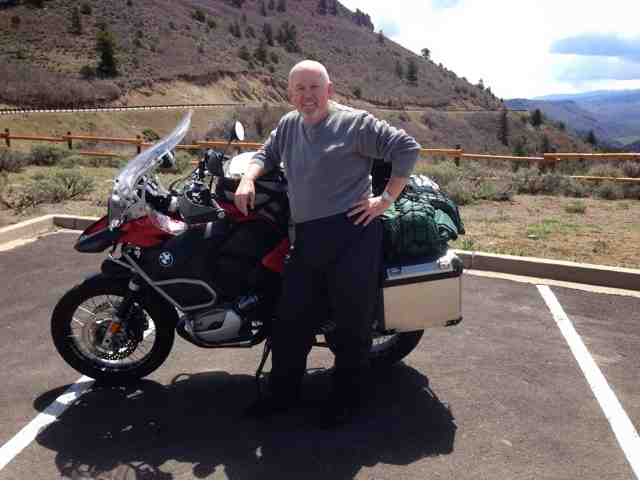 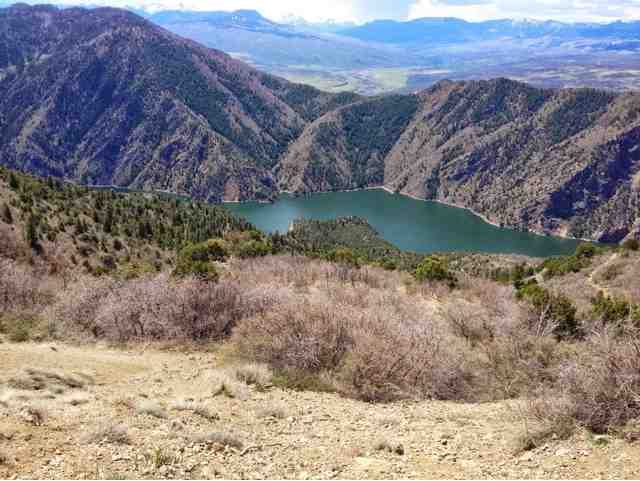 Posted by DicksLongRide at 5:30 AM 2 comments:

For some reason unbeknownst to me I decided to test my limit as it relates to how far I can ride in 3 days.  I think I may have reached it.  I rode just at 2,100 miles from Sarasota to Crested Butte, Colorado.  When I got to the hotel last night I could not ride another 2 miles to go to dinner.  Ted and I took a shuttle into town.
Tigger thought it was fun but he was a passenger so he got to look a scenery and relax.  I didn't stop a lot to take pictures but the one posted here is from a rest stop some place in Kansas.
The beginning of the trip was a little auspicious. I left home in heavy fog, ran into a closed I-75 for about 40 miles, and learned that the new GPS I purchased was not functioning properly. Before the day was out, I lost the only pair of prescription glasses that I own.
My friend Ted was at the hotel waiting for me when I arrived. Since a long day on the motorcycle for him is 250 miles he had a few choice comments about my sanity. 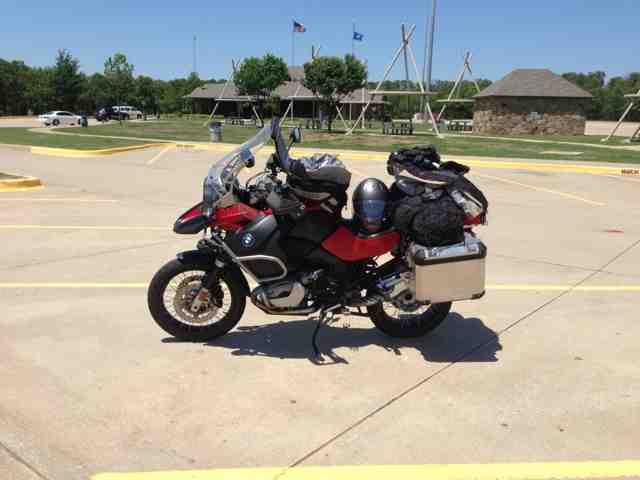 Posted by DicksLongRide at 5:49 AM No comments:

Here is a fella that always has a smile on his face. If you look closely you will notice the smile is just a bit bigger than usual. That is because he is looking forward to his first long trip in five years. What a guy! 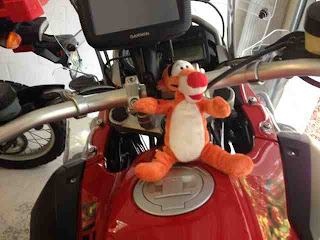 It's not a motorcycle but here is Jane's ride. 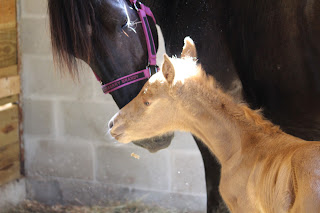 Posted by DicksLongRide at 6:07 AM No comments: